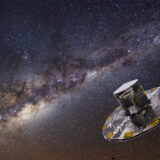 Link to the web: http://gaiaverse.eu/fre_news/gender-on-gaia-dpac/

The number of women entering the sciences and earning degrees is increasing in all fields but one: computer science. Despite progress, the under representation of women continues to be a problem in all narrow fields of science and engineering, except life science. The average of the International Astronomical Union statistics for 2015 is a 16% of female permanent positions in astronomy. Women remain severely underrepresented within the sub-field of computing. Recent figures from “She Figures 2015” indicate that the proportion of female PhD (ISCED6) graduates in computer science is still only 21% at EU-28. Thus, it is mandatory to stimulate young woman researchers’ careers in computer science.

Nevertheless, when dealing with the figures in She Figures 2015 and this study, it is important to keep in mind that all the data presented throughout are measured in headcounts and thus fail to take into account that much of the women employment is part-time in the research population.

Of the 431 full members of the Data Processing and Analysis Consortium (DPAC), 329 are men and 102 are women, representing the 24% of the total.

See below the percentage of women in all CUs in comparison to the total number, from the lowest CU4 (Object Processing) having only a 10%, to the highest, CU2 (Data Simulations), with a 33%. The data from the Data Processing Centres is more linked to pure computing engineering and less to scientific profiles, so it is expected to have a lower number of women representation. Moreover, it is also more linked to specific countries, being the lowest percentage of women participation from Switzerland and the highest to France, also as expected.

Representation in the DPAC governing bodies (DPACE, PO, GST) shows as well an average 28 percentage of women participation. The highest correspond to the GST, the more scientific one, the lowest to the Project Office where there are only 2 women out of 9 members.

Representation of women in Meetings Representation of women in User Requirements and Beta Testing Group

One of the actions foreseen in the project to ensure as much as possible the gender balance, was dedicated to the set of users defining the requirements for the DPAC systems and tools, as well as in the set of testing users validating them. The aim was not only contribute to the gender balance in the DPAC community, but also to help avoiding gender-bias in its design. It is formed by 23 men and 13 women (36%).

The Archive Beta Testing Group consists of 18 men and 10 women. That is another 36%.

The Gaiaverse Twitter profile has 434 followers, of which 26% are women.

Indeed, the profile of our followers can also be studied in comparison to our “Organic audiences”, that is all those that interact with our Tweets, whatever they are followers or not.

With this comparison we can see that the percentage of women that follow directly our contents about Gaia through Gaiaverse profile is a 26%. This is a 5% higher than the percentage of women that could be potential followers (21%). This means that Gaiaverse has managed to attract 5% more women than our organic audience, those that you reach because they are interested in the subject.

Gaia DPAC results for a 25% of women participation in more scientific groups (CUs) and a 19% in more computational ones (DPCs).

With a total of 24%, these are significant numbers considering the known percentages in related fields. However, gender bias is still a major problem in computational and space science and it is clear that time will not redress the under-representation of women in an adequate fashion and that specific measures are needed.