Gaia was launched on 19 December 2013 at 09:12 UTC. Its nominal mission ended after 5 years of successful operation on July 2019. Due to the availability of fuel and good performance, the mission was extended to 31 December 2022, subject to a mid-term review in 2020.

The complete schedule of next publication of Gaia data can be found here.

As for previous releases, the Gaia (E)DR3 data will be made available through the Gaia Archive and partner data centres. A description of the expected contents of Gaia Early DR3 is given below. An overview page for Gaia Early Data Release 3 helps to find all relevant information for the Gaia EDR3 release.

To ease the use of the data, the Gaia EDR3 table in the Gaia Archive will be complemented with a set of Gaia DR2 radial velocities.

Background of the data

Positions and proper motions are referred to the ICRS, to which the optical reference frame defined by Gaia EDR3 is aligned. The time coordinate for Gaia EDR3 is the barycentric coordinate time (TCB).

It includes five-parameter astrometric solution – positions on the sky (α, δ), parallaxes, and proper motions – for more than 1.3 billion (109) sources, with a limiting magnitude of G = 21 and a bright limit of G ≈ 3.

An additional set of more than 361 million sources for which a two-parameter solution is available: the positions on the sky (α, δ) combined with the mean G magnitude.

Here you can find a full description of the contents of this release.

On 25/04/2020 Gaia mission celebrated the second anniversary of Gaia Data Release 2. The Gaia catalogues have been embraced by many scientists across the world. In those 2 years, almost 3000 refereed papers based on Gaia Data Release 2 have been published. That amounts on average to 4 papers per day. 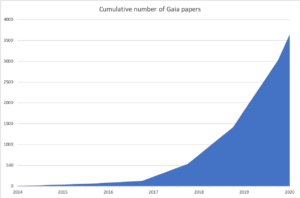 The first Gaia data release DR1, published on 14 September 2016, includes the positions and G magnitude for about one billion stars using observations taken between 25 July 2014 and 16 September 2015.

In addition, for a subset of data – about 2 million stars in common between the Tycho-2 Catalogue and Gaia – there is a five-parameter astrometric solution, giving the positions, parallaxes, and proper motions for those objects. This is referred to as the Tycho-Gaia Astrometric Solution (TGAS).

Photometric data for RR Lyrae and Cepheid variable stars that were observed frequently during a special scanning mode that repeatedly covered the ecliptic poles was also made public.

Below you can see a visualisation of how Gaia scanned the sky during its first 14 months of operations, so for the time period covered by Gaia DR1.

This “skymap” figure illustrates the areas of the sky that Gaia observed during these roughly five months of Commissioning.
The axes are Equatorial coordinates (right ascension and declination), whereas the colour scale indicates the measurement density (as observations per square degree). Such density depends both on the sky in itself and on the “scanning law” followed by Gaia.
As we can see, there are areas where the density is significantly higher than in others. This is due to the special scanning laws in which Gaia has been operating during these Commissioning months. Specifically, there are two small areas with a very high density: the “ecliptic poles”, that is, the points on the celestial sphere crossed by an imaginary line perpendicular to the ecliptic plane – where the Earth travels on its orbit around the Sun.
This feature is intentional: The Commissioning phase was designed to run mostly on the so-called “ecliptic poles scanning law” (or EPSL), in which the spin axis of Gaia is completely fixed with respect to the Gaia-Sun axis (not doing any precession motion around it). With this we have been observing the ecliptic poles every day, allowing DPAC scientists to use the stars in such poles as references and perform essential diagnostics on the satellite, its instruments and the on-ground data processing systems. This EPSL mode can be either “trailing” or “leading”, that is, with the Gaia spin axis at -45 or +45 degrees with respect to the Gaia-Sun axis on the ecliptic plane.
We have also tested different manoeuvres and scanning modes of the satellite during these months. For example, setting the spin axis to zero degrees with respect to the Gaia-Sun axis (or “sun aspect angle”). Also, and specially, the “nominal scanning law” (NSL), which is the mode in which Gaia operates during nominal mission. This NSL has been tested twice during commissioning – including the “Galactic Plane scan”, in which we observe a very high number of stars almost following the Galactic Plane to stress-test all the systems.
The video nicely illustrates all these manoeuvres. It starts with the EPSL-trailing mode, followed by the EPSL-leading mode (including a short period with a sun aspect angle of zero degrees). A few days later we test the NSL mode, then coming back to EPSL-leading, and finally NSL scanning close to the Galactic Plane.
These “skymap” figures are automatically determined by the Initial Data Treatment (IDT) from the data processed by this system every day, using the star measurements and the attitude information provided by the satellite. The composed image and movie have been prepared by the UB team.