Home » News » Telescope Joan Oro participate in the detection of Gaia16aye, a flaring object of uncertain nature in Cygnus

Telescope Joan Oro participate in the detection of Gaia16aye, a flaring object of uncertain nature in Cygnus 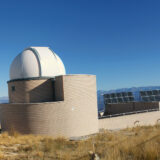 Telescope Joan Oro participate in the detection of Gaia16aye, a flaring object of uncertain nature in Cygnus

A Gaia science alert was triggered last 5 August when the object Gaia16aye was found 1.2 magnitudes brighter than during previous Gaia observations (the latest of which conducted on 20 June).
Follow-up ground-based observations reveal a red source gradually brightening at a rate of about 0.1 magnitudes per day without changing its colour and showing no fast variability. The observations obtained on 13 August show the object reached and its brightening rate increased to 0.6 magnitudes per day.
The ground-based photometric measurements are being conducted with the 0.8m telescopi Joan Oro at l’Observatori Astronomic del Montsec, the 0.6m telescope of the SAI Southern Station in Crimea, the pt5m telescope at the Roque de los Muchachos observatory on La Palma, the 0.6m Akdeniz Univ. UBT60 in the TUBITAK National Observatory, Antalya, and the 0.8m telescope at Serra La Nave.
The information about this phenomenon was published in The Astronomer’s Telegram (http://www.astronomerstelegram.org/?read=9376). The ICCUB (IEEC-UB) astronomer Josep Manel Carrasco, co-author of this article, commented that after its publication more observations were made which indicate that it can be a microlensing event caused by a binary lens, which produces an asymmetric light curve. Probably the first peak of the curve was not detected by Gaia and the alert was activated once the first peak was already decreasing.You can find the light curve upated at:

The Gaia satellite is an European Space Agency mission to map out our own galaxy, the Milky Way. To do this, Gaia will look at the entire sky over and over for five years, so that it can track the positions of the stars over time. But while Gaia is looking at the sky, it will also spot thousands of transients.

A transient is anything which appears, disappears or changes in the sky. Some of these transients can be stars exploding as supernovae, or black holes swallowing stars. The Gaia Alerts project is working to find out such events in the data from Gaia, and announce them to the world in real time.

When a transient is detected by Gaia an alert is triggered and the follow-up network of ground-based telescopes starts its work in order to give more information about the phenomenon.
The Gaia Science Alert Project invites amateur astronomers and scholars to contribute to the investigations. The information about participation terms are available at https://gaia.ac.uk/alerts

The Observatori Astronòmic del Montsec with the Telescopi Joan Oró is the third most contributing observatory among all of the participants in the Gaia photometric science alert project.

Telescopi Joan Oró has the capability to change the observatory scheduling in real time with the minimal human interaction as requires the Transient phenomena. More information on Montsec Observatory can be found at www.oadm.cat/en/.