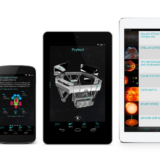 Posted by Gaia UB team on Mar 21, 2020 in News, Slider | Comments Off on “One Billion Eyes For One Billion Stars”: Exhibition Available

“One Billion Eyes For One Billion Stars” The exhibition (in English, Spanish and Catalan) produced by the Barcelona team to explain Gaia for all audiences. Now updated with five new panels about the Second Gaia Data Release and available online. Available online in four languages: English, Spanish, Catalan and German   See digital exhibition here!

Gaia starts mapping the galactic bar in the Milky Way (Notícies UB) The first direct measurement of the bar-shaped collection of stars at the centre of our Milky Way galaxy has been made by combining data from the Gaia mission (European Space Agency, ESA) with complementary observations by ground- and space-based telescopes. The study, published in Astronomy & Astrophysics, was led by researchers from the Institute of Science Cosmos of the University of Barcelona and from the Leibniz Institute for Astrophysics Potsdam (Germany). The second release of data from Gaia star-mapping...