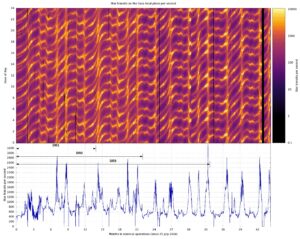 On 14 April 2018, about 10 days before the second Gaia Data Release, the spacecraft and daily data processing systems have reached yet another stunning milestone: the number of star transits has reached 100 billion!

The Gaia satellite has two telescopes pointing to two regions of the sky separated by 106.5 degrees. The satellite spins at a rate of 6 hours per revolution with the two telescopes scanning a great circle and the stars continuously transiting the focal plane. Every day, Gaia instruments record about 70 million transits. A full transit includes an observation in the sky mapper (to detect the objects in the sky), 9 observations for astrometry, 2 for spectrophotometry and 3 for radial velocity measurements (see a video explaining the measuring process here: https://www.youtube.com/watch?v=bbfb8VhH7L0). Roughly speaking, each transit yields 10 individual observations for astrometry (counting the sky mapper). Therefore, the 100 billion individual transits mean 1 trillion (1000 billion) individual observations acquired.

There are obviously more transits than real, physical objects. As already anticipated, Gaia DR2 will contain “only” 1.7 billion sources, but each of them has been observed a number of times – that is, the features of each source have been determined from the data of several transits. We have estimated that each source will be observed, on average, in 70 transits during the nominal five-year mission, which means we should reach (and most probably exceed) 120 billion transits – that is, 1.7 billion sources times 70 transits. So far, in 3.7 years of nominal operations and considering 1.7 billion sources, Gaia has already observed each source more than 50 times on average.

As a consequence of the non-uniform density of sources in the sky, the number of objects transiting the focal plane varies very significantly with time. Figure 1 shows a time-time illustration of this fact. In the top panel, the horizontal axis is the day since the start of nominal operations (labelled in months), the vertical axis is the minute of the day (labelled in hours), and the colours indicate the average number of transits per second acquired during that day and minute. As said, the density of transits strongly varies with time, from just a few tens per second up to several thousands per second when Gaia observes from the emptiest areas of the sky to the densest areas of the Milky Way.

The top panel of Figure 1 shows some interesting features. One can see black “gaps”, which correspond to the times when the Gaia instruments were not acquiring data. Some are just calibration or on-board configuration activities, others are spacecraft manoeuvres, and others are “safe modes” – with the February 2018 event being the most remarkable one, easily seen towards the right end of the plot. Overall, Gaia instruments have been off during less than 1.7% of the time (with almost half of this time corresponding to the mentioned safe mode).

Apart from the gaps, changes in the way of scanning and changes in the way of working of the instruments are seen as sudden changes in the picture. The most remarkable feature of the plot is the observational pattern, which basically corresponds to the four revolutions per day and the two viewing directions. Each telescope crosses the Milky Way disc twice in each revolution producing a total of 16 crossings each day. These crossings are the narrow bright bands in the top panel of Figure 1. Every few months Gaia scans almost exactly along the Galactic plane, which is seen as the bands of the top panel getting steeper and also as peaks in the bottom panel.

In between the bands we also see two bright dots. These are the Magellanic Clouds, satellite galaxies to our own Galaxy. Like the Milky Way they are conspicuous objects even to the naked eye.

Because of the precession of the spin axis around the Sun-Earth direction, the scanned great circle varies its inclination with respect to the galactic plane, and from time to time that great circle coincides with the plane. In these periods the number of transits reaches the maximum capacity available on board and some objects are not observed or their observations are not downloaded to the ground.

Maybe we can better understand the scale at which Gaia operates with the following equivalence: If we would like to observe each of the DR2 sources during just one second, we would need 54 years. Gaia has already observed each star during more than four seconds 500 times in less than four years. The accumulated exposure time exceeds 133 thousand years!

Gaia is now almost 45 months into its mission. The second Gaia data release, due on 25th April 2018, covers the first 22 months, so we have in fact already twice as much data at hand.

The nature of DPAC data processing requires to iterate several times over the data in order to achieve high accuracy in both calibrations and the results delivered with a Gaia data release. In order to facilitate intermediate data releases the amount of data processed is kept limited for the earlier releases with more and more data being added to the processing for each subsequent release. For Gaia DR3 DPAC will process about 34 months of data, while for Gaia DR4 it is planned to process the full five year set of raw data from the nominal mission.