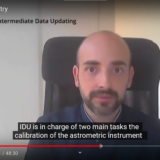 The Gaia data releases contain a wealth of astrophysical data on about 1.8 billion stars in our Milky Way and beyond. The creation of these data releases is in the hands of the Gaia Data Processing and Analysis Consortium, Gaia DPAC, which has itself organised in 9 Coordination Units with help from 6 Data Processing Centres. Each coordination unit contributes its expertise in the chain between the raw data and the scientific data as provided to the community from the Gaia Archive. Coordination Unit 3 is the team responsible for the core processing.

One goal of the CU3 meeting was to discuss how the most accurate star catalogue to date, Gaia Early Data Release 3, can be improved for Gaia DR4. Even though Gaia EDR3 is already of unprecedented quality, effort is spent to further reduce the systematics. This is increasingly difficult with each data release. The systematics to be removed become smaller, hence the errors to get rid of get smaller as well. This means that one has to take into account smaller and smaller effects in the processing and calibration to further improve the accuracy of the Gaia astrometry. The ultimate goal is to further disclose the secrets of our Milky Way. With each step made in the astrometric accuracy in the data releases, astronomers can see more detailed features and discover more about the structures of the Milky Way. The effort spent now in the processing helps astronomers to be more succesful in their investigation of the Milky Way.

The second part of Gaia’s data release 3 is expected in 2022 and will contain higher quality and at the same time more radial velocities, astrophysical parameters, classifications of variable stars, lightcurves for variable stars, as well as data for solar system objects. Gaia DR3 will also for the first time bring Gaia’s BP/RP spectra, RVS spectra, non-single star results and extended objects to the community.